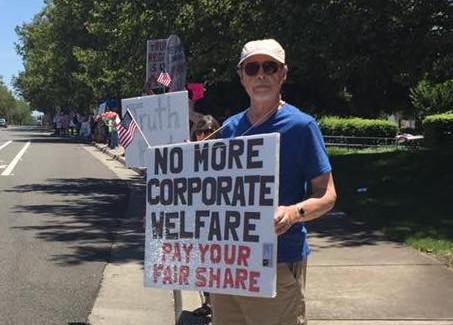 Late this past summer, voters in California’s 4th Congressional District told researchers that growing the national and local economies—in order to provide good paying jobs—is among their highest priorities. Yet, hard as it might be to believe, apparently it is not a priority for the Trump Administration or its allies in Congress. What else can we conclude from the budget approved recently, with Congressman Tom McClintock (R-Elk Grove), voting “Aye”?*

As the former Assistant Secretary of Commerce and Director of the Economic Development Administration (EDA), I can testify to the fact that Tom McClintock’s vote for the Republican budget does NOT align with voter interests. It eliminates the EDA, a program aimed at enhancing economic growth and job creation in our local communities. Instead of enabling communities to meet the challenges of globalization and technological change, the budget would curtail Federal support for ongoing local economic development initiatives.

Another example of EDA’s assistance in central California is the recent $3 million grant to the City of Fresno for economic adjustment assistance to promote private entrepreneurial investment. The project’s private investment ratio has been estimated to be over eleven-fold, resulting in a private sector investment of an additional $35 million. The related jobs, income and taxes will do much to bolster Fresno’s economy and the well-being of its citizens. And part of Fresno County is within the 4th CD.

In addition, EDA offers the Revolving Loan Fund which supplies small businesses and entrepreneurs with gap financing needed to start or expand their businesses. The list goes on including a national network of 11 Trade Adjustment Assistance Centers to help strengthen the competitiveness of American companies that have lost domestic sales and employment because of increased imports of similar goods and services.

The $261 million Federal funding of EDA is leveraged multiple times and plays a central catalyst in promoting local solutions and initiatives to meet our communities’ economic development goals. America can only be great when its communities are great.

*Tom McClintock, member of the House Budget Committee, supported a budget resolution, passed by the House, to eliminate the Economic Development Administration. The budget resolution sets the stage for the tax bill.