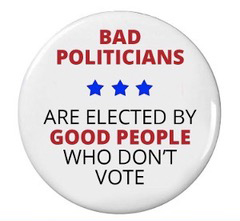 The 4th Congressional District of California is home to approximately 725,000 people, of whom roughly 450,000 are registered voters in the district. Approximately 100,000 people who are legally eligible to vote are not registered to do so. And that means their voice is not heard in Washington, DC. Those active in Sierra Forward believe that lack of representation is wrong. In our democracy, everyone deserves to be heard, deserves to be represented. Even worse, the fewer people who vote, the better the chances are that undeserving people will be elected.

To address this problem, Sierra Forward is mounting an ambitious and non-partisan voter registration effort across nine counties of the 4th CD (Placer County Democrats are spearheading a separate but complementary drive). We are actively recruiting, training, and deploying volunteers from Alpine, Amador, Calaveras, El Dorado, Fresno, Madera, Mariposa, Nevada and Tuolumne counties.

Utilizing an organizational model pioneered by Barack Obama’s phenomenally successful campaigns of 2008 and 2012, we are forming local neighborhood teams and asking them to identify unregistered citizens, to engage them in conversations, and to persuade them to register. But, and this is vital, the relationship won’t end there. Our volunteers will stay connected with the newly registered voters until Election Day. We are doing this because a study of the 2016 election results revealed a sad fact: In some key jurisdictions newly registered voters turned out to vote in far fewer numbers than did those who were longtime voters.

Sierra Forward Field Representatives will be working with Democratic Central Committees and Clubs, as well as the various Indivisible and independent Progressive groups that have sprouted and grown since last November. We are also coordinating with other organizations (e.g. organized labor and environmental interests), which share our vision for better, more accountable representation in Congress.

You can help this effort by volunteering to help in your area, and/or by donating to the cause. A donation today will help us reach and inform potential voters, get them registered and then engage them in the weeks and months ahead. Please join us in this important drive.