Tom DeVries lives in the Sierra where he raised his family and award-winning peaches. He worked as a journalist and television producer for a number of national and regional outlets, covering politics and government, crime, the environment, and the economy. His stories appeared on CBS, NBC, PBS, Turner, Discovery, America’s Most Wanted, and elsewhere. His print journalism appeared in the San Francisco Examiner, Chronicle, Los Angeles Times, Newsweek, The New York Times, The Washington Post, The New Republic, New West, and elsewhere. He’s lost track, to tell the truth.
Sierra ForwardArticles by: Tom Devries 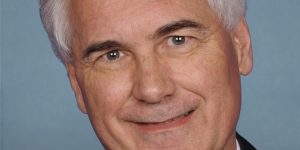 Dear Representative Tom McClintock, You won your reelection and you probably feel pretty good, as you should. It was a tough race, harder than any since your first. I am … 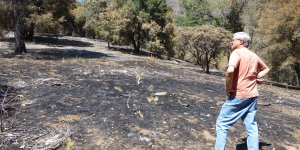 My neighborhood near Yosemite is pretty much decorated with handwritten signs thanking firefighters. They saved our community. They saved my house. This is my sign.   We weren’t here …

Maybe our Congressman figures if he says nonsense to a Hard Right Fake News outlet nobody will notice. A couple of days ago he said this to Breitbart: “Now Jerry …

There are two obvious ways all citizens are expected to participate, but only one of them is compulsory — voting you can do or not; skip a jury summons and …

A few days ago while you were paying your taxes (or not, if you are perhaps quite wealthy or a large corporation), our Congress guy, Tom McClintock, was snuggling up …

People as far away as Panama probably now know that the 2017 Republican tax cut worked spectacularly well if you were a large corporation or very wealthy. Panamanians would know …

Once upon a time there were two candidates in the general election for an important office and, as happens, feelings ran high. Not just as to between the two general …

Tom McClintock believes in 1) logging, and 2) dams. He’s the ideal Nineteenth Century guy; cutting down trees and damming rivers worked for California in 1880 so what could be …

Sometime very soon our Congressman, Tom McClintock, will vote to cut Social Security and Medicare. It is what he believes and what he has promised. And after nearly ten years …

The Governor/Movie Star said the other day on CNN that his party, the Republican Party, McClintock’s party, is ‘dying at the box office.’ Presumably McClintock doesn’t agree. So let’s review …