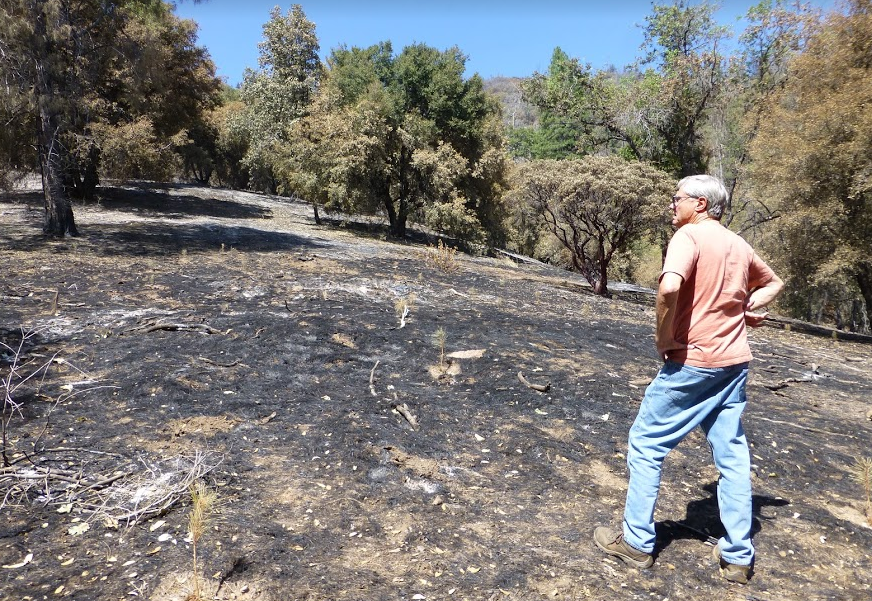 My neighborhood near Yosemite is pretty much decorated with handwritten signs thanking firefighters. They saved our community. They saved my house. This is my sign.

We weren’t here when they did it. Smoke from the Ferguson fire drove us out a couple of days before the official evacuation, before we thought the fire could actually get over the two mountains and down the hill to our place. Just the smoke was choking awful. So we left without a thought about having a house to come home to.

I don’t know who came to save our place, only that there were a lot of them, and that they had a bulldozer and that airplanes were involved. It is surprising to me that I want badly to know who they were, where they came from. Not even to reach out or meet them. Just to know.

We have what is called ‘defensible space’ and I expect the firefighters who came appreciated that. Over several years, with financial support from the government, we have thinned trees and removed brush from many acres of this ground. What was left here to burn was grass mostly, so when the fire did come down the mountain it wasn’t terribly hot. The mature trees were maybe singed. Firefighters also chopped hand lines around our water tank and in front of the house. The general rule is that a fire line is supposed to be twice as wide as the adjacent fuel is tall so those hand lines are maybe two feet wide. They’re made with a tool called a McLeod, kind of a really big hoe. With winter snow and rain, and with new grass, traces of the these battle lines will all disappear.

What I’m saying here is that the strangers who came — arriving, the neighbor tells me, at 2 AM — have left hardly a single lasting trace that they spent two days here. There are a few red-orange  streaks on the roof from the retardant the planes drop. The hand line ties into my driveway where I had planted some lavender and it’s gone. The dozer cleared some brush along my road. Somebody with a chainsaw trimmed the redbud back from hanging over my porch. I found a couple of empty water bottles — it was in the high 90s, for heaven’s sake. I can see where the engines were parked. That’s about all.

And my house is still here.

We spent some hours sweeping the ash and cinders off the porch and walkway. We cleaned out the refrig — the power was off for about three days so food in the freezer is going to the dump. There’s still a bit of smell of smoke.

A small army came here, from I-don’t-know-where, with tools and heavy tracked vehicles and airplanes and helicopters. They had a violent skirmish with nature. They prevailed. And they left.

This is not the day to complain to Tom DeVries about government inefficiency.